There are few past and existing Members at NRCG who could have been described as exceptional.  This portrayal falls short in dignifying Sister Alison Bush. Alison may have been the most, or one of the most, highly recognised by her peers and State and Federal Governments in the short history of NRGC.

Alison was born in 1942 at Sydney’s Royal North Shore Hospital, a twin of sister Jenny, during the war years. Her Father and Mother leaving Darwin for safety after the bombing raids.

The family moved back to Darwin at war end and their parents were keen on the girls to have a career. Both girls were interested in Nursing.

In 1960 Alison commenced her studies at Marrickville Hospital and after her studies she studied midwifery and infant welfare. On completion in 1969 Alison began working at the Royal Prince Alfred Hospital and immediately set about trying to raise the number of Aboriginal women in antenatal care.

Once settled in to her chosen career Alison’s love of sport stood out, Alison represented NSW in both the junior and senior NSW Cricket Teams, playing with the Balmain Club in 1963 where, in representing NSW, she became the first full blood Aboriginal to represent the State.

1965 was Alison’s shift to her favourite sport and at this time joined North Ryde Golf Club. In 1976 she was part of the winning team in the LGU Grade 3 Pennant. Alison remained a much-loved Member for 45 years until her passing in 2010. 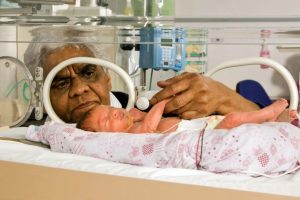 Alison’s distinguished career had many highlights: In 1998 she became the first midwife to be awarded fellowship of the Royal Australian and New Zealand College of Obstetricians and Gynaecologists. Other awards included, Distinguished Nursing Service Award RPAH, Honorary Fellowship of the NSW College of Nursing, Inducted into the Aboriginal Hall of Fame, Centenary of Federation Medal and officer of the General Division of the Order of Australia.

Alison will always be remembered for her sparkling sense of humour and love of 1960’s music.

Among the over 500 mourners who gathered at St Brigid’s in Marrickville to mark her passing were the Governor-General, Quentin Bryce, and the NSW Governor, Marie Bashir.

“She was at home on the streets of Redfern as she was at Government House,” said Bashir in her eulogy. “The RPA achieves such heights because of the humanity of its people and she was a towering model”

It was always fun knowing Alison and she could be seen most nights after work at the Club. She was singularly unique and we were lucky to have her as a member

← Back to previous page